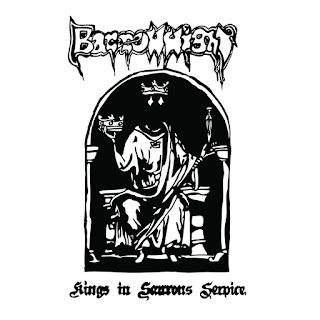 Depending on your perspective, this release is either AOTY* material or totally dubious. Or both! Whatever it is, I like it. Here's the deal: Canadian underground metal combo Barrow Wight started life as a Venom cover band. You'll be able to tell right away – vocal-wise, the singer is a dead ringer for Cronos, for one thing. Along with his gravelly gargle, the raw bass-heavy riffage on offer here likewise owes a lot to Venom. But, as maybe you can glean from their name, this band is also obsessively into the Lord Of The Rings, that's their entire theme.

Now, Tolkien is a common enough lyrical influence in metal. Heck, it sometimes seems as if almost every black metal band is named after some place or personage in Middle Earth – and Venom was the original black metal band, after all – but still, the idea of the primitive, rippin' Motorhead-ed metal of Venom mixing with the more mystical high fantasy stuff that full-on Frodo fandom can conjure is just a bit wonderfully absurd.**

In practice it is too, in a totally enjoyable way. Barrow Wight let us know that they are aware of the absurdity – you can't title a track "No Sleep Til Gondor" without a sense of humor – but they pull it off, sounding something like a cross between Venom (or contemporary metalpunks Midnight) and their fellow Heavy Chains recording artists Tarot! I mention the latter 'cause Barrow Wight's Tolkien side isn't just in the titles and lyrics, but is also made musically manifest a time or two via elements of hoary 'hobbit rock' from the sixties and seventies not commonly associated with Venom. Just listen to "Osgiliath" with its "Astronomy Domine" sounding parts:

The strains of Pink Floyd heard here help to make Barrow Wight stand out as being not just a mere Venom clone. Elsewhere, also, occasional echoes of the acid rock of Uriah Heep, The Doors, and/or Iron Butterfly crop up by surprise. One of the most overt examples of Barrow Wight's 'psychedelic prog chocolate in my metal punk peanut butter' songwriting schtick occurs at the two-and-a-half minute mark of "In League With Sauron" when the heavy, dirty riffing suddenly gives way to some groovy organ-based jam-a-lama, unexpected and exuberant.

The result of this stylistic collision is that Barrow Wight are one of the few bands around who, probably without even intending it, could hang with the similarly screwy likes of Meads Of Asphodel and Zemial (the musty majesty of the sinister, percussive "Dwimmerlaik" really reminds me of those genius Greeks).

Can I really justify my love for this album? At the end of the day, Barrow Wight of course aren't Venom – and they're a lot further from being Bo Hansson – but they do a good job of paying tribute to their idols, delivering on their dorky (but cool) cult concept without being too silly or too serious. Bottom line, this puts a grin on my face. So, yeah. Hail Sauron and rock on! (–Allan)

**Though not as odd as the Tolkien-themed dub of Prince Far Isengard!