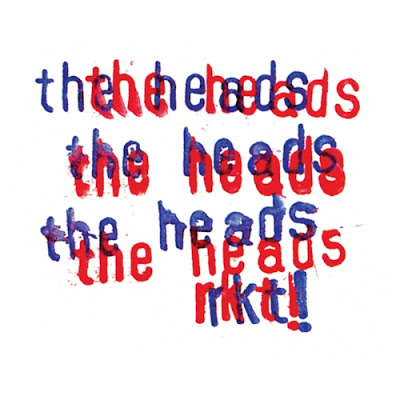 Heads up, folks, nothin' new (or old) this week, not even the 73-track super deluxe Appetite For Destruction reissue, is gonna beat this – a double CD or triple LP freekout of rare vintage material from these hypnotic UK garage fuzz jammers, including the tracks from their debut split 7", all newly compiled and remastered from the first three releases they put out on Rocket, circa 1998-2002.

It includes a 'Conga'd Out' version of their classic (and classically titled) "Spliff Riff" and also a track named "Neu75" so you know it's gotta be good. One of the cuts, "KRT," takes up two whole sides of vinyl (or most of the 2nd disc in the compact disc set). It and the rest of this collection are the definition of sprawling, glorious, drugged-out, and fuzz-filled (natch).

Released by The Heads' own Rooster Rock label, you can pick this up from Midheaven mailorder, where you'll find a few sound samples to check out – if such checking out is even necessary before purchase of anything to do with The Heads. Or dive into a couple of the tracks via YouTube, below:

Email ThisBlogThis!Share to TwitterShare to FacebookShare to Pinterest
Labels: drugs, fuzz, Record Of The Week, Rooster Rock, The Heads

ROTW: The Water, The Stars!

Andee's such a big, big fan of this band, whose 2013 debut we made an aQuarius Record Of The Week (we closed up shop before reviewing their second album, unfortunately), that he volunteered to write this big, big review of their brand new third LP (on Lauren Records) for the band's website. Thus, this is a surefire WDYLI ROTW pick, too! Read on and check out what might be your new favorite indie rock album...


It’s been almost exactly two years since Sacramento musical mesmerists Sun Valley Gun Club released their practically perfect, self-titled sophomore album. That record was absolutely my favorite album of 2016, and remains one of my favorite records to this day, getting almost as much play in 2018 as when I first heard it. The only times I ever really stopped listening really, were the occasional desperate attempts to try to avoid getting sick of those songs, which I quickly discovered was something I didn’t really need to worry about at all!

So when I first discovered there was a new SVGC record, I was pretty excited. I had been hearing the band perform some of these songs live for a while, but when gathered all up together, as The Water, The Stars, they revealed themselves to be yet another pitch perfect collection of classic indie rock, filtered through SVGC’s unique sonic lens: a hook-heavy hybrid of languorous twang and noise pop crunch, each song impossibly catchy on its own, but even more compelling as part of the whole. Like with the previous album, I had to fight the urge to simply listen to individual songs over and over and over endlessly. But honestly, I didn’t really fight all that hard...

The opening track “If You Would Only Wait” perfectly encapsulates the Sun Valley Gun Club sound, a galloping blast of jangle and crunch, driven by distorted vocals, fuzzy guitars and some dizzyingly loose-limbed drumming. Hooks everywhere, the bridge as catchy as the verse, the verse as catchy as the chorus, the band deftly delivering the occasional feedback drenched squall or slipping into syncopated, almost metallic heft. And of course, one of the most distinctive parts of SVGC’s sound, their tendency to take what is essentially a pop song and stretch it WAY out at the end, letting it transform into something much more psychedelic and dreamily droney, a sprawling, hazy and heavenly psych jam that could stretch out forever, and I would not mind one bit.

As if the opener wasn’t good enough, “She Is Gone” might be one of the best songs SVGC have ever written, which is saying a lot for a band whose catalog is essentially made up of coulda/shoulda/woulda been stone cold classics. Laconic vox draped over woozy jangle, a sweetly slacker indie rock that finds the perfect middle ground between Pavement and Built To Spill, laced with some of the most divine background harmonies, the whole song demonstrating the band’s unparalleled pop-song mastery, still channeling the nineties, but making that sound wholly and totally their own.

And that’s just two songs in. The rest of the record unfurls just as dramatically, from the slow burn of “Falling Apart”, replete with spidery guitar melodies and a seriously crushing breakdown, again liberally laced with feedback and impossibly catchy hooks, to “Goodbye Columbus”, which sounds like a twangier take on unsung San Diego math pop crew Heavy Vegetable, to the last-call mope pop, countrified slow-jam of “Years After All”, an hypnotic see-saw between the Beatles-beholden Weezer-shred of San Francisco pop legends the Ovens, and a drowsy and drunken, sleepy smolder, laced with lush horns that lend the song an almost funereal Calexico vibe, all dusty and dusky.

As the record draws to a close, the sound winds down as well, “Time” takes the mumbled country of the late great Souled American, and lets it blossom into late night, Wilco-worthy dirge pop, the group effortlessly infusing that last-call melancholy with the sort of pathos more often paired with sonic bombast, instead of subtle, subdued songsmithery. And finally, the record closes with “I Saw A Pigeon,” lush with organ and horns, another sweetly maudlin dirge, that slowly builds to a fierce finale, a bombastic big finish: swirling squalls of guitar shred, raspy emotive vox and soaring horns. It’s like the final number of some big production, indie rock musical, that just as quickly fades into silence with one final peal of feedback.

As a whole, The Water, The Stars ambitiously expands on the group’s already impressively expansive sound, exploring a more diverse sonic palette: electric piano, slide guitar, organ and those aforementioned horns, as well as displaying the group’s ever-evolving songwriting and arranging. SVGC manage to make all of these songs sound oh so warm and familiar, but somehow at the same time, manage to make that familiarity impossibly exciting and unpredictable.

Since the very first time I heard Sun Valley Gun Club, I was totally perplexed that somehow, this band was not hugely popular. I’d see them play in front of 50 or 100 people, but the sound seemed impossibly incongruous to me. It was the sound, and the songs, of a band that should be playing huge festivals, selling out multiple nights at midsize venues, a group who should have music writers everywhere slavering, and blogs and magazines losing their ever loving shit. And every song on every one of their records should be finding their way onto mixtapes and playlists and should probably never, ever leave your stereo. The Water, The Stars only reinforces that impression, along with my belief, that Sun Valley Gun Club could very well, and SHOULD very well, be your new favorite band.
Posted by horrox No comments:

Hey, sorry, we skipped posting a Record Of The Week last week. To make up for that, here are six picks from the past six months of releases that really coulda, shoulda also been ROTW selections here already:


Fondation Les Cassettes 1980-1983 (Bureau B)
Collection of material from obscure early '80s cassette releases by this husband-wife ambient synth pop duo from France, who had previously played in such experimental/prog acts as Zed, Musica Elettronica Viva and Spacecraft. Beautiful stuff. Bureau B sure can dig 'em up...


Mind Spiders Furies (Dirtnap Records)
The fifth album from these electronic garage punk faves is, as always, awesome, and more blippy-bloopy-bouncy than before. They do a cool cover of a Grauzone song, even! Brings back some Six Finger Satellite memories...


Pharaoh Overlord Zero (Hydra Head/Ektro/Full Contact)
Latest hypnotic and idiosyncratic example of "NWOFHM" from this crucial Circle-side project. Guest starring Antti Boman (Demilich) and Hans Joachim Irmler (Faust) – and yes, mesmeric krautrock mixed with extreme Finnish weirdness is what this is all about.


Tomb Mold Manor Of Infinite Forms (20 Buck Spin)
Thee best death metal album so far this year and probably of the rest of this year, too. You wanna argue about it? Heck even if you do, then you must be into death metal enough to at least admit this second proper full-length from Toronto's rotting, rocking and ruling Tomb Mold is pretty freaking sick and brutal, eh? If not, take our word for it.

Not brand spanking new (it came out back in February) and in fact this "Black Metal" (yeah let's put that in quotes, and you can add "Death Metal, Doom, Drone, Psychedelia" to that as per their Discogs page) band has an even newer release out since, from April, a 12" vinyl only collaboration on Utech with saxophonist Mats Gustafsson that's also great, BUT for those who may have missed this and have any sort of affinity for out-there extreme metallish weirdness we wanted to give this second proper Chaos Echœs full-length some belated ROTW attention.

Featuring in their ranks two brothers, both former members of a French technical death/black metal band called Bloody Sign whose final album from 2010 was titled Chaos Echoes, the band Chaos Echœs is what happens when blackened death metal goes experimental. While it doesn't sound like jazz (despite their motto being a Wayne Shorter quote, "To hell with the rules, I am going for the unknown" and of course the above-mentioned association with a saxophone player) it is somewhat improvised and freeform sounding, the tracks as atmospheric and endless as their wordy, obscure song titles. It's compelling like an unbidden vision of the unknown. Uneasy listening, both ambient and aggressive, it's a trance-inducing experience of extremity that both Aluk Todolo and Ævangelist fans should appreciate. Get their 2015 album Transient first, perhaps (also on NWN!) and then sink into this one. Or vice versa, doesn't matter.