Got the heels, but not the squeals

So, Andee and I are naturally in the habit of sending each other links to check out of interesting discoveries on Bandcamp or YouTube that we just stumbled upon – mostly metal bands for whatever reason (but generally not the sort of metal you’ll find in Slamz Jail – that stuff's more appropriate to Andee and former aQ-er Kirk’s special bromance). And then we’re always thinking, hmmm, hey, guess one of us ought to make a blog post out of this or that one, y’know, do a review. Though, admittedly, not all the things we choose to share with each other really need all that much written about ’em – probably just saying, “Hey this is cool [or weird, or whatever] so check it out and give it a listen” would be sufficient, as it is for us.

For example, this, the debut studio album from '80s styled Austrian heavy metal act High Heeler, something I recently ran across randomly and sent to Andee, saying: “Hey, here’s one for you – I don't think the band is all that great (they sorta sound like Cauldron with an Austrian accent) but it's kinda cool and they perhaps have the best name/logo EVER, what do you think?”


Andee’s response: “Haha, that logo DOES rule. You're right. not the best, but pretty solid. Kinda dig the leads. Reminds me of the Scorps a little. Vocals a little tough to take…oh yeah, vocals are kind of a deal breaker. Even the gang vocals are a bit off. Too bad. If they had a really rad eighties style wailer, it'd be a whole 'nother story…”

To which I can only add, yep, too bad. Since I do love the whole idea of a band called High Heeler making retro glam/sleaze metal with NWOBHM influences, and their logo's so perfect for that. Plus, there’s even somebody in the band who spells their name "Andee," how ’bout that! That’d be Andee Overtone, one of the guitarists. Alongside C.C. Stiletto (axe), Dynamike (artillery), and Poison Poser (voxx, bass, album cover painting). Aha, right there with those jokey monikers you can see maybe the problem is that these guys just don't take what they're doing seriously enough – but that’s weird, since apparently the band has been around since 2000, having released an assortment of demos, eps, splits, and a surprising number of live VHS videotapes in the fifteen years prior to this full-length album. Clearly, they're into the humor of what they do, but it also must mean more to them than just some yuks to be at it for that long. Unfortunate that ol’ Poison Poser isn't a better singer but I wonder if maybe the band is his brainchild and thus it would be kind of tough for him to relinquish the frontman role?

Ah well, you know what, I might still pick up a copy when/if I find it for cheap – I'm a sucker for a cool name & logo plus I've got a bit more tolerance for questionable 'clean' singing in traditional heavy metal bands than Andee does (whereas, he's much more accepting of hard-to-take harsh vokills in extreme metal bands that I am, generally speaking.) 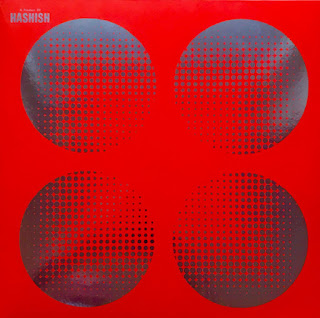 I’ll admit to having attempted to inhale once or twice in my life, long ago, with mixed results; but Andee doesn’t even drink (although, he has been known to overdo it a bit with the NyQuil when he’s got a cold). So we’re basically two drug-free individuals, bordering on straight edge in Andee’s case. I mention this just in order to say, this isn’t the first time we’ve wondered what it means that we find that a LOT of the music we both enjoy is rather overtly drug-oriented (influenced by drugs, encouraging the use of drugs, meant to be listened to on drugs, etc.). Maybe that’s not surprising, of course, since the Venn diagram overlap of ‘drugs’ and ‘music’ is a big fat one. But still, we wonder, why do we spend so much listening time in that zone? Are we hoping for a ‘second-hand smoke’ effect of some sort? Is there something that we’re missing out on, since we love the likes of Monster Magnet and Electric Wizard so much, not to mention being into bands with names like Bongripper, Harsh Toke, and Salem’s Pot, without ever getting high? (Allan also likes the ‘80s German NDW band Spliff a lot, but that’s another story).

So, when Swedish psych label Subliminal Sounds put out an album by a band called, simply, Hashish, figured that’d be one we’d probably dig too, imagining some primitive krauty drum circle thing, and/or blown out heavy stoner jamming, but it turns out that Hashish ain’t heavy or hippy like that. Nope, this is a different sort of dope music, that’s more like some sort of new age exotica, smooth and soothing, Hashish laying down a very blissful brand of space funk that’s just this side of cheesy, with percolating grooves (someone gave that drummer some) propelling the listener through lusciously synth-sizzled, serene, sunny soundscapes. Whoosh. Hashish have plenty of glide in their stride, and zip in their zap, on such cuts as “Outer Spaced” (some stoned boom bap there, with shades of “Blow Your Head” style synthesizer action). Mostly instrumental, with occasional vocoder interjections, and female vocals on “Fly Away,” A Product Of Hashish is a synth trek that folks who appreciate the (amazing) West Coast album by Studio just might want to investigate, the vibes are kinda convergent.

The main guy here is a fellow named Stefan Kéry, who was in freeky ‘80s garage psych revivalists The Stomach Mouths, by the way, and also in a band/project called Zonk whom I only know from their cover of “Sweet Leaf” on a Swedish Sabbath tribute comp - so no wonder I thought Hashish might sound like another Skogen Brinner, or Dungen, but they fit more with the strain of Subliminal Sounds releases like Ìxtahuele that celebrate an important proto-psychedelic music genre: exotica (see Patrick Lundborg’s book Psychedelia - An Ancient Culture, A Modern Way Of Life, pages 103-126, for more on that subject). The more I listened, the more I liked - and remember, it was only the music working on me. Groovy. (–Allan) 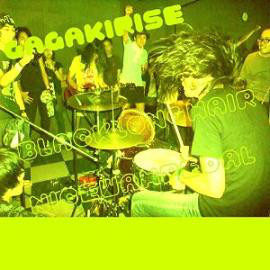 Woah, it’s a glorious, distorto din of absolute exuberance outta this Tokyo two-piece! Scroll down and see for yourself in the live footage below.

Now, I pretty much picked this up because of the title of the disc (and 'cause the band is Japanese, of course that’s crucial, oh and plus I found a copy for cheap) but had I been paying better attention I’d have known that last year Thrill Jockey put out a 7” single on which Gagakirise collaborated with Eye from the Boredoms, and before that, in 2014, they had a cassette release on the esoteric Ormolycka label; either of those facts indicating that Gagakirise probably has something going on.

I should try to check out those recent releases, since this 20 minute mini-album, which actually came out seven years ago in 2009, is pretty darn rad, with songs that sound something like Lightning Bolt blowing up, a total garage shred explosion of catchy, curly, chaotic riffery, that’s heavy and spazzy, with a very 'sprong-y' guitar sound and hella ummphh - Hella and the Ruins being two other two-pieces one could easily name check to some degree in describing these guys, who have also got a bit of the noisiness (if not the grindiness) of another Japanese band with black long hair, Sete Star Sept.

Hey folks, especially the local to San Francisco ones, we’re finally having a farewell-to-aQuarius party and you’re invited - please come! It’ll be at the Make Out Room (on 22nd Street, around the corner from the old aQ/current Stranded on Valencia) on Sunday, December 4th.

It’s a late afternoon/early evening event, starting at 3pm or so and going ’til 8pm, with a couple of great bands (and friends of ours) performing around six or seven - namely lovelorn lo-fi indie pop janglers Swiftumz, and Metallica-loving noise popsters the Tony Molina Band (ex-Ovens). Figure those two will be happy/poppy/fun enough to lift our spirits at this aQ wake… So please come and hang out with various ex-aQ staffers, fellow former customers and assorted music nerds to mourn the end of an era while also celebrating the good times we had and all the crazy music with which we’re mutually obsessed. You can also bug Andee and Allan in person about progress on our big aQ book project... It's a free event, but sorry, it's not all-ages, though. Facebook event page here.

Also, on FB: our old customer/pal Dan Vallor (aka trippy soundscaper Clarinette) just set up a cool Friends Of Aquarius Records group on Facebook, to function as both a memorial to the store and also another way for former aQ-fans to connect, reminisce, and maybe even network about their own new musical projects and releases. Very awesome, thanks Dan! And thanks everybody who has already joined up and especially those posting photos and sharing memories of the shop.

Lastly and leastly - fyi, the Slamz Jail page on this site has recently been updated. Check it out if you dare. (Glad to see at least two people have found it amusing thus far!)
Posted by horrox No comments: