Over eight hours of (aQ) hits! 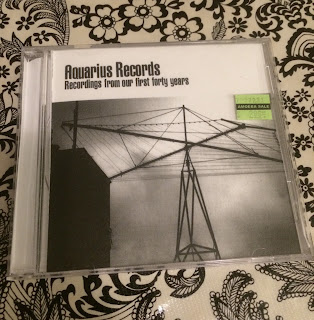 I (Allan) was browsing in Amoeba the other day, and was surprised to find a copy of this incredibly rare, limited edition cd-r in the 'various artists' section of their experimental cd bin. At the bargain price of just $2.99, I had to pick it up, especially since I realized I didn't actually already have a copy myself. In fact, it took me a few seconds after I spied the cover to even recall what the heck it was...

Back in 2010, aQuarius had a big 40th Anniversary party, and we made a massive commemorative 'mix tape' for the event, in the form of a data cd-r of mp3's – 118 tracks, approximately 8 hours and 20 minutes of music! Pretty sure Andee compiled it, with input from the rest of us. We made just sixty numbered copies available to party-goers. (This one is #18/60.)

It featured a whole bunch of crucial faves we'd hailed on the aQ list between 1995 and 2010, everything from Os Mutantes to Philip Jeck to Uz Jsme Doma to Neutral Milk Hotel to Kathy McGinty to Beyond Dawn to Hatebeak to Boards Of Canada to The Bee Gees, and (of course!!) quite a few selections from The Conet Project, as well as choice cuts from The Ghost Orchid, Sounds Of North American Frogs, and Sounds Of American Doomsday Cults.

We mixed in some one-hit wonders at the shop like The Jones Machine and Jud Jud, as well as highlighting tracks by longtime staples of the aQ catalog like the mighty Circle, the Thai Elephant Orchestra, Village Of Savoonga, and the Ethiopiques series. And you'll find not just one but two f'ed up cover versions of Iron Maiden songs. So many obscure faves and favorite obscurities. While not totally comprehensive (it'd have to be another 8, or 10, or 20, or 100 hours long) it's still a pretty spot-on 'greatest hits' of a lot what we were listening to and raving about at aQ back in the day. Needless to say, our eventually forthcoming 'big book of aQ reviews' will include our write-ups about ALL of these, without a doubt.

Fyi, the text on the back of this disc's Conet-homage packaging reads as follows:

"aQ40: To commemorate the 40th anniversary of aQuarius recOrds, we've gathered up some of our all time favorite tracks from throughout the store's long and storied history, songs and sounds that defined the store, and helped make aQuarius one of the most idiosyncratic sources for far our sounds in the world. Many of these gems were aQ Records Of The Week, most of them are long out of print, and all of them are amazing! A sprawling sonic mix tape for our beloved friends and customers around the world. aQ would be nothing without all of you. Thank you from the bottom of our hearts for your years of love, loyalty and support. And of course for loving music as much as we do!"

So, anyway, after stumbling across this quite awesome (imho) aQ40 mega-mix cd-r at Amoeba, I got the idea to edit it into a continuous, seamless mix (since it was just a playlist of individual mp3s before) and put it up on the internet to share with everyone. I split it into four parts of roughly two hours each to make uploading (and listening to) it a little easier. Here it is, enjoy – you can click through to Mixcloud to see the full track listings for each of the four parts, if you like: 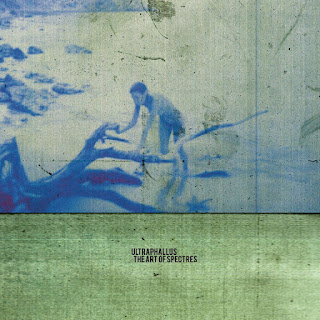 When we reviewed this Belgian unit’s previous disc, Sowberry Hagan, on the aQuarius list four or five years ago, for some reason we omitted to discuss their (ironically?) hyper-masculine name. That could have been the only review of them ever not to talk about how they chose to be called Ultraphallus. Well, gonna mention it now, if only to let you know that if you were to assume on account of their moniker that their music was especially aggro, ugly and crude, that would be an ultra-fallacy (sorry). While they are quite heavy and noisy, there’s an artier, and sometimes softer side to the Ultraphallus equation too (arty enough for the Sub Rosa label now, following an association with Riot Season).

Practitioners of a peculiar style of downer experimental sludge rock, Ultraphallus’ music on The Art Of Spectres can be a difficult, doomed-out listening experience, referencing a variety of diverse, deviant musical influences (a few they cite include the Swans, Autechre, "death-metal," and the Residents!) and rarified cinematic obsessions. For instance, one brief 1:23 interlude here is titled “The Death Of Mark Frechette,” memorializing an event which I googled so you don’t have to – Frechette, the star of Antonini’s cult classic Zabriskie Point, died in 1975 at the age of 27 in a prison weightlifting accident. Ouch.

Elsewhere, though, the album's morbid, ominous atmospheres are a bit more epic than that, Ultraphallus doing everything in their considerable power to create emotionally weighty, creepily cinematic soundscapes. A fundamental framework of shaking, shuddering drone-distortion and trance-inducing percussive pummel tends to run throughout these seven tracks, over which strange, often distressed singing occasionally intrudes. The vocals never really get deathly like you might expect; instead their stylings range from weirdly whispery to almost warbly melodic. The proceedings are also laced with electronic effects, disembodied trumpet, rhythmic reveries, and surprising moments of ambient bliss - providing more of a moody and unusual context for the slow, lumbering, ultraphallic sludgery of the guitars. RIYL: Oxbow, Swans, Old Man Gloom, Today Is The Day, The Body, Hey Colossus, Gnod... (–Allan)


Posted by horrox No comments: 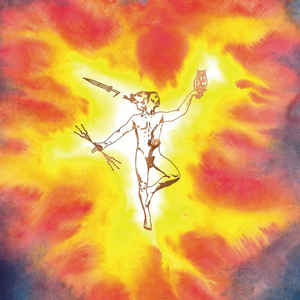 On November 25th, the stylish, sludgy Swiss death metal duo Bölzer finally released their debut album following a few well-regarded eps. Compared to those eps, the eagerly awaited, but backlash-beckoning full-length has less in the way of "Wolfshook"-worthy riffs and more in the way of, um, shall we say controversial clean vocals.

The present inmates of Slamz Jail take a listen and try to figure out what to make of it, first impressions...

Kirk: Have any of you sick metal fucks heard the new Bölzer? Lots of clean crooning.

Allan: I've been so curious, it's gotten pretty much universally bad reviews – makes me think I might like it!

Kirk: Yeah exactly! It's out officially now. You can stream it wherever. I think maybe the songs are a little long and drag a bit but they are really catchy and pretty and sad. Lots of wolf-howl croon.

Andee: The vocals are pretty painful, which makes me think Allan WILL like it.

Kirk: You think so? When I saw them live doing old songs and new the clean vocals made perfect sense. It flowed seamlessly. But the new one has basically no "metal vox.”

Andee: You know I love bad vox, but those seem bad BAD... to be fair, I've only heard one song, will check out the whole thing today.

Harry: Gonna give it a sneaky spin now.

Kirk: Curious to know what Harry thinks. My biggest complaint is just the song length.

Kirk: That's good to hear. It's kinda got that Mithras spacey feel.

Harry: It does! But a bit more epic in the traditional metal sense of the word.

Harry: I think the vox are really cool.

Kirk: Yeah I don't know why people don't like ‘em.

Andee: You would too.

Harry: I dare say the vocals are putting hair on my chest in a somewhat Hellenic fashion. Lol.

Andee: This might be the most ridiculous 'metal' song i've heard in a while:

Allan: Yeah, not bad at all, pretty cool actually... And listening to some more of the tracks on Hero right now, while I'm not ready (yet) to say it's a brilliant work of genius, it seems at least as good or better than a LOT of 'extreme metal' stuff out there that people seem to like – if different. And, honestly, I'd much rather listen to vocals like these on this album than 95% of the samey harsh/guttural/growling 'vokills' on most death and black metal releases.

Andee: Told ya! ...Things I like more than the new Bölzer: the new Witchery, the new Denouncement Pyre, and maybe surprisingly, the new Norma Jean.

Allan: I like it... but the Bölzer is better.
Posted by horrox No comments: