Um, so in no particular order, and for no particular reason, here are a dozen reggae/dub albums circa 1976-'84 that happen to have cover art that I think could almost work perfectly well on the sleeve of a heavy metal record from roughly the same era instead. Or at least, if they got filed in the wrong bin you might not instantly notice. The urge to research & compile this list was inspired by our very first example:


The Revolutionaries Top Ranking Dub Volume One (Duke Reid, 1978) ... The typeface used isn't especially 'metal' but the red-eyed ghoul in WWII Nazi helmet imagery sure is. Who knew Eddie liked dub? Decent enough album but it only gets top ranking on this list due to the cover art. 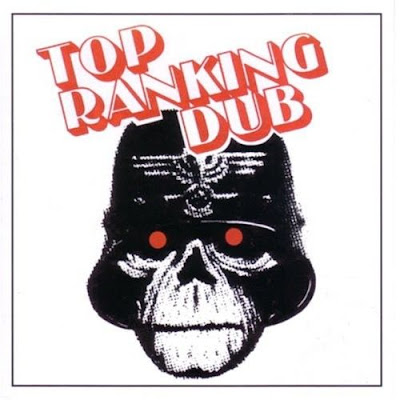 Phil Pratt Star Wars Dub (Burning Sounds, 1978) ... Darth Vader and lightning bolts are both hella metal, right? This is a pretty good dub album but it can't quite live up to the magnificent cover graphics, in my opinion. Still, someday when they make Vondur In Dub they can just use this cover. 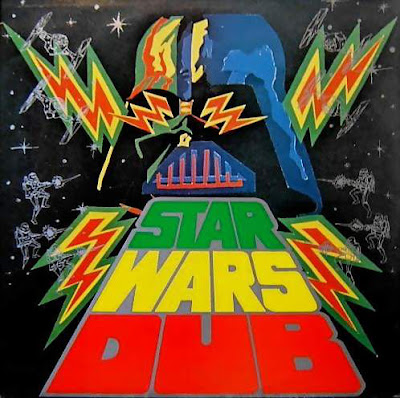 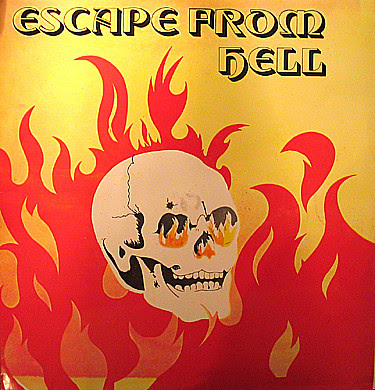 Bunny Wailer Blackheart Man (Solomonic, 1976) ... Super dark, grim n' spooky cover art. Album title rendered in what's almost a black metal logo style. Artist's name printed in a font quite similar to the one used on Black Sabbath's debut (the exact identity of that font being the subject of some debate, as it happens). Yeah, definitely one that belongs way up on this here list. 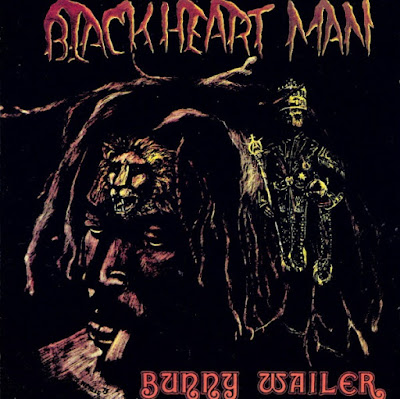 The Royals Ten Years After (Ballistic Records, 1979) ... Take away that red-yellow-green border and maybe the dreads and you've got a cover that looks like it belongs on an early Judas Priest album for sure. Sad wings indeed. 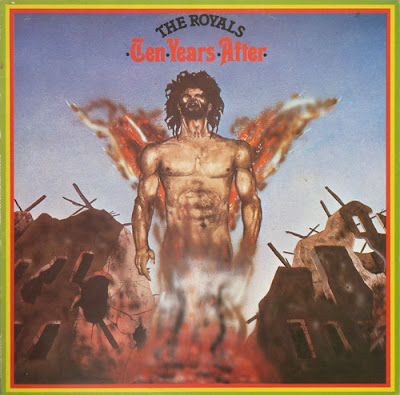 Dennis Brown Words Of Wisdom (Laser Records, 1979) ... Meanwhile, this album has art that could do double duty on a proto-metal platter by some obscure, hypothetical Uriah Heep wannabe, whattya think? 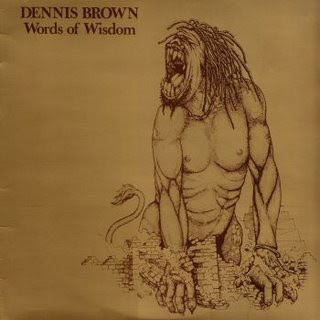 Massive Dread s/t (Gorgon Records, 1979) ... Ok, so maybe this one doesn't really look like an actual heavy metal album cover. But, it's certainly rad, right? Furthermore, the brawny musculature and length of hair/beard of the fella on the front – and the size of the spliff he's smoking – would certainly qualify him to pose for some super-heavy stoner metal band's album cover, I think. A great freakin' album, sadly not reissued on cd as yet. 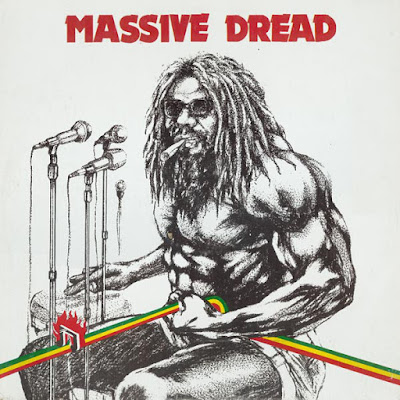 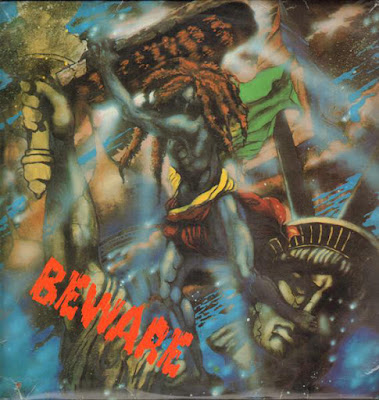 Lizzard Satta I (Trojan Records, 1976) ...  Color scheme aside, totally '70s proggy proto-metal lookin' cover art and logo style here, eh? The (sadly not on cd) reggae album is pretty cool but I'd love to hear the imaginary mystical metal record that would share this sleeve in an alternate universe. Maybe something a bit Thin Lizzy-ish? Or, a la Rainbow? 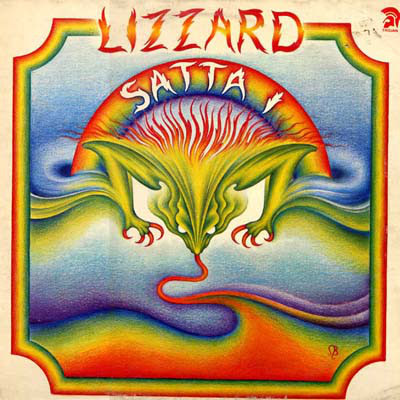 Revolutionaries Revival (Cha Cha Cha Music, 1982) ... These cats show up for a second time on this list with this militant album. It looks more like an action movie poster than a heavy metal album, ok, but the very first track is called "Black Sabbath!" (And another is titled "Death.") 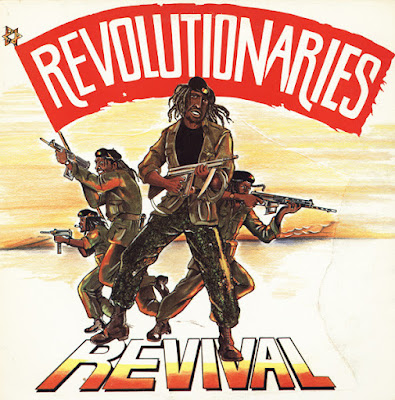 Prince Alla Evil Forces (Calabash Records, 1984) ... Dude's face/expression isn't very metal, nor is the logo at the top, but I think the bloody font used for the album title qualifies this for inclusion here, as do the various examples of evil forces listed on the cover (which sadly aren't song titles). Plus, bats. 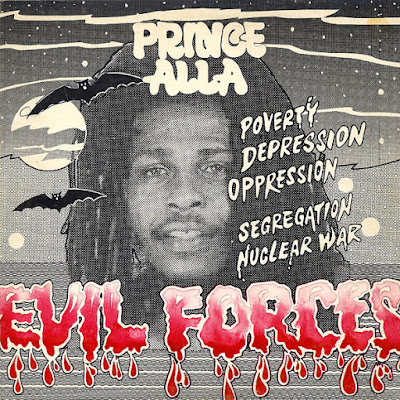 Scientist Heavy Metal Dub (Clocktower, 1980) ... Although it fails the truth-in-advertising test (there's nothing 'heavy metal' about the music) you can't argue with these Star Trek themed dub tracks. And thanks to the title & the sorta Pedro Bell style space operatic cover art this had to be on this list! 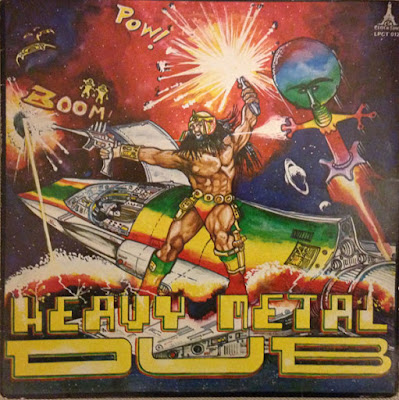 That's the dozen! I've thought of a few runners-up already but if anyone else has any further suggestions to add to this list, comments are welcome. Number 13 on the list would, of course, be the amazing album by Black Ark Oaken Saw, if only it wasn't just an April Fool's joke. (–Allan)
Posted by horrox 1 comment:

Thanks to our pal Matt for recently turning us on to this cool album, the debut recording by jazz/drone/rock minimalists Derby Derby, released earlier this year. Especially since we might not have checked it out otherwise, on account of their less than evocative moniker, if we'd ever even run across it in the first place.

The disc features essentially one piece, divided into two tracks, of instrumental music performed on trompette électrifiée, basse, and batterie (they're French, this trio is).

It's plodding (but slowly, inevitably accelerating), droned-out, deceptively simple, texturally dense, and totally trance-inducing stuff, definitely for fans of Outside The Dream Syndicate by Tony Conrad & Faust, as the sole commenter on their Bandcamp page quite accurately notes. We could also imagine folks into the likes of The Necks, Dead C, Circle, and Oren Ambarchi all digging this.

And please don't get scared off by the electric trumpet – if told it was a guitar, we'd believe it, certainly when the skronky soloing frenzy erupts on the more propulsive track two, "Dance."

Copies on cd [edit: actually cd-r, despite the pro-printing and nice digipak] or vinyl are available for mailorder from the Ormo label's online shop.
Posted by horrox No comments:

Email ThisBlogThis!Share to TwitterShare to FacebookShare to Pinterest
Labels: Derby Derby, Ormo, Record Of The Week 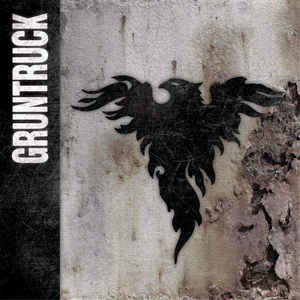 We make no apologies. Being that WDYLI is the "webzone of ex-aQ overlords Andee and Allan," after all, what do you expect us to do? Of course this self-titled album of long-lost recordings by defunct Seattle band Gruntruck would have to be Record Of The Week.

Both of us are Gruntruck fans from way back in the day, so when a suddenly unearthed, previously unreleased third album by the group, recorded circa 1998-2002, is brought out by the aptly-named (such is their mission) Found Recordings label, automatic ROTW, yep! However, those of you not partial to grunge, well, get with the program (or just check back next week). 'Cause Gruntruck = grunge.

The band featured members of The Accüsed and Skin Yard (including frontman Ben McMillan, who sadly passed away in 2008 from complications related to diabetes) and leaned heavily to the more metallic side of the grunge equation. This 'new' album, produced by Jack Endino and some other fella, is totally in the vein of their original, earlier two records, 1990's Inside Yours and 1992's Push, and thus makes for a welcome, if posthumous, return for fans like us.

Okay, so to be clear, it's not like we're necessarily asserting that this is absolutely the greatest Record that came out this Week... nor are we proclaiming it the best Gruntruck album ever (if you've never heard 'em before, definitely start with Inside Yours). But it just might be the best grunge album released in the past week, and is without a doubt the only Gruntruck album this week! So, ROTW as far as Andee and Allan are concerned.

Take a look at this video for the song "Bar Fly" from the album, made with vintage live footage of the band, and see if it pushes any of your (perhaps dormant) grunge-lovin' buttons, too:


Gruntruck is available for mailorder on both cd and lp from Light In The Attic, where you will also find some sound clips to check out.
Posted by horrox No comments:

This time around our WDYLI ROTW is the latest release from the always awesome Utech label: a compact disc by a ritualistic Taiwanese drone-folk-psych-synth duo that's new to us, though this is their seventh or so entry in a discography dating back to 2013, mostly composed of tapes and cd-rs – this is their first actual cd.


Posted by horrox No comments:

There are a bunch of essential/awesome vinyl reissues that dropped recently that could easily be Records Of The Week: Danish hippie psych band Alrune Rod with their wonderfully trippy Hej Du LP originally released in 1971 (now on Shadoks); an unusual Italian library (more like laboratory) music artifact from '72 called Science & Technology by Raskovich (via Dead-Cert); the self-titled 2003 debut from Steven R. Smith's Eastern European influenced folkdrone project Hala Strana on vinyl for the first time (on Desastre); and also for the first time on vinyl the most crucial masterpiece from John Zorn, Bill Laswell and Mick Harris's grind-jazz-dub-ambient outfit Painkiller, 1994's overwhelming double disc set Execution Ground (on Karlrecords)... all worthy potential ROTW picks... but what about something new for a change?

Well, California's White Manna aren't a brand new band, but they do have a new record, brought to you by the combined powers of both the Cardinal Fuzz and Agitated labels, and it's a good call to be thee ROTW this week for anyone into Hawkwindy psych rock, with a dash of the Stooges. Which is everyone we know, pretty sure? Loads of riffs, effects, and, yes, songs too. Catchy ones, even. 'Twas recorded by our pal Phil "Life Coach" Manley and mastered by former Monster Magnet John McBain.

The Bandcamp page we're linking to already sez "sold out" of all formats, but don't panic, chances are that Midheaven Mailorder has copies, or perhaps your favorite local record store will, upon its release date of 10/6/17 – this Friday. Meanwhile, by the way, those other fantastic albums mentioned in the first 'graph above all ought to be sourceable from Forced Exposure if you're interested.