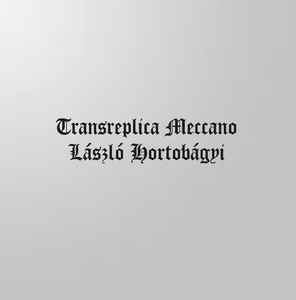 Ooooh. Another desirable reissue to fill this week’s ROTW slot. We would have loved to have had a reissue of this to list back in the aQ days!

Originally released as an LP in 1989, and then reissued on cd & vinyl again in 1991, this is the long-out-of-print debut solo album from Hungarian ethnomusicological electronic maestro László Hortobágyi. In the years since, has added quite a few more discs to his idiosyncratic discography, which sometimes veers a bit too far into ravey nineties cyber-electronica territory for our tastes, although his detailed faux-ethno concepts are always intriguing. In any case, this debut, recorded circa '88-'89, is solidly recommended.

We should note it has slightly different track list than previous editions. Same actual tracks though, essentially. Apparently, Hortobágyi remastered and reworked the songs in 2006, making some small changes to the vocals and mixes, as well as to the running order of the album, and slightly altering the track titles too, for some reason (a la German Oak, who apparently had their children come up with new titles for their songs, which explains a lot, see our ROTW two weeks ago). It’s still full of creepy vocal intonations, blissful sinister ambience, and esoteric industrial ‘world music’ atmosphere, however!

Samples on this album are said to include:


Also quite recommended, by the way, and reportedly getting a small repress this month, is the same label's recent vinyl reissue of early '80s Japanese electronic composer Yasuo Sugibayashi's The Mask Of The Imperial Family.

Email ThisBlogThis!Share to TwitterShare to FacebookShare to Pinterest
Labels: Laszlo Hortobagyi, Lullabies For Insomniacs, Record Of The Week, Yasuo Sugibayashi

Which means this new archival compilation of extremely rare cuts from a whole lot of trippin' hippies is a sequel of sorts to one of our all-time favorite anthologies from Numero or anywhere, the wizardly Warfaring Strangers: Darkscorch Canticles collection of obscure proto-metal treasures they put out three years ago!

This one’s maybe a bit less mystical D&Dish heavy prog, more garagey drug-addled acid rock, but if that’s a distinction it's one without much of a difference when it comes to awesomeness. It also includes a couple of drug fiending krautfits on it, as opposed to the all-American lineup of acts on the earlier comp. We've only heard of a few of the bands on here before, so this represents some deep digging. But that's what they do.

Fans of Darkscorch Canticles as well as RidingEasy's Brown Acid series (which is about to spawn its fifth volume, by the way!), should check this out pronto. And just peep that rad black light cover, something to dazzle the optic nerves while yer ears are getting dosed...

ROTW: Down In The Bunker!

Hey, folks. Thus far, reviews here have been few and far between, we know. We’ve been working on various projects – including, slowly, ‘The Book’ – but would like to get more posts happening here.

So, gonna try to post, yes, a RECORD OF THE WEEK every week. Not necessarily a review, more like an alert, or announcement. A recommendation. An advisory. Regarding something that, were we still making ROTW choices for aQ, might have been this week’s model.

We’ll try to do this every Tuesday, in honor of the day of the week that the God of the Old Testament decreed was the Day of the New Release, before some fools changed that to Friday.

Our choice today is an easy one, a real doozy, coming from krautrockers German Oak, who are thee originators of (literal) Bunker-Funk, and Andee’s favorite krautrock band ever. Allan loves 'em a lot too, though can’t necessarily rate them higher than, say, Faust, Can or Amon Duul II. But they’re up there. And with this new, expanded, totes deluxe reissue of their mysterious masterpiece from back in 1972, maybe now really up there.

As you may recall, aQ reviewed a prior, bootleggish edition of German Oak’s self-titled album some years ago, making it a Record Of The Week then, naturally enough, and among the things said about it then was the following:

"Dark and frightening, ominous and rumbling. A huge cavernous space, giving everything the appropriate claustrophobic, underground feel, drums stumbling through the darkness, warm swells of guitar and organ billowing out like puffs of smoke. Almost ambient at times, pulsing and pounding at others… Super lo-fi but thick and heavy and lush in its own way. The sound of the bunker is definitely another instrument, a primitive caveman studio, adding a subterranean timbre to the creepy jams and abstract rhythms… So gorgeously spacey and ominous, throbbing and moody."

Amazingly, the Now-Again folks, who previously celebrated the essential Paternoster album with a reissue in this same fancy ‘Reserve’ series of theirs, have managed in some occult manner to get in contact with the original members of German Oak in order to fully excavate the bunker and make this expanded, remastered reissue package an undreamt-of reality. Which means, three LPs, three cds worth of German Oak’s bunker-brewed genius – with alternate, extended, & unreleased tracks! Also, the band’s preferred song titles are now featured, not the WWII-oriented ones found on the original private-press LP release. Which, incredibly enough, includes a track titled “Happy Stripes (On Cats)” – now that’s a bit different in mood from the likes of “Swastika Rising,” ain’t it?

Because of the change in some song names, and the sheer extra expanse of material on offer here, we’re still a little bit unsure of the exact overlap between German Oak recordings we’ve heard before and this release – it would appear the tracks from the Nibelungenlied disc that Witch & Warlock put out in ’92 are not included for some reason. If this was a proper review, we’d find out. Presumably, that information (and lots more) is probably in the band-sanctioned liner notes (with rare photos, etc.) included here, which we have yet to delve into.

Order from Forced Exposure while they’ve got copies! Stranded we’d imagine might have them too, vinyl anyway.
Posted by horrox 1 comment: