Mellows un-harshed at any speed 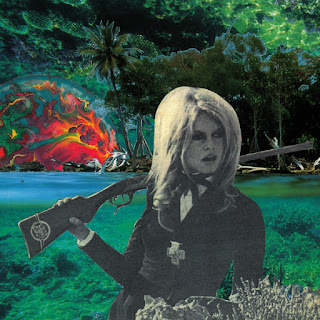 Man, I really, really love this! Perhaps that's no surprise, considering that in its two principals it boasts the talents of one of The Heads and one of the Monster Magnets.

Along for the ride with those two guitar guys is the rhythm section from The Heads as well, Messrs. Morgan and Maskell. So make that three Heads and one Monster Magnets! Why, then, it's not billed as The Heads/McBain I dunno, but the music does come closer to the sort of spaced-out, synth-laden kraut channelling that Price's Kandodo project specializes in than it does the more manic fuzzfestering grungery typical of The Heads, delivering all-instrumental, lengthy, super stoned hypno-jams summoning the spirits of early Ash Ra Tempel, Agitation Free, and Guru Guru for sure. More current-day comparisons could be to Carlton Melton (natch), Hills, or a really, really relaxed Earthless, perhaps. Urthona, too.

These guys know what they're doing (drugs, one might assume) and it never gets boring or aimless, as this sort of thing might from lesser lights. There's a fluency and fluidity to this that's magical. Devotees of lulling, lolling reefer-riffery should not require much further encouragement – strap on the headphones and get ready to float away on these softly flowing waves.

So what more do you really need to know? Just one thing: making me love this even more, the album is explicitly intended to be played at either 45 or 33rpm, listener's choice. That is, at 45rpm, you'll hear what's presumably the original, 'normal' speed version of the recording, titled Lost Chants – but it's also meant to be played at 33rpm, becoming the slower, lower Last Chance opus. Since there are no vocals, they can do this, it works pretty well. And as probably anybody would predict, the lugubriously lovely 33rpm version is perhaps the better of the two, but it's nice to have both. These spacey grooves are already pretty monumental at any speed. Slowing 'em down just makes 'em even more enjoyably endless seeming, more somnolently enveloping, and of course 'more heavier.' A real nod scene. But then, sometimes I'm in the mood for the sharper, relatively jaunty (but still lumberous and slumberous) Lost Chants original.

Each track even has a different title assigned to it depending upon the chosen playback speed, a nice touch. For example, opening track "Blowed Out" on Lost Chance at 45 becomes "Really Blown Out" on Last Chance at 33; likewise track four "Chant Of The Ever Circling (Last Vulture)" stretches out into the "Chant Of The Every So Slowly Circling (Last Vulture)" in its slower, downpitched incarnation, and so forth. At least, that's what the internet (Discogs) tells me, though the compact disc edition I'm reviewing doesn't include the 33rpm track titles anywhere I can find. However, as a further nice touch, it has been issued as a double, with Lost Chants one one disc and Last Chance on the other, so those of us like myself who prefer cds over vinyl can hear both versions without having to invest in a variable speed CDJ player (still wish I had one of those, though...).

I also kind of wish they'd have gone and made it a triple cd, with a 16rpm disc as well. Though actually then it would have to be a quadruple cd, 'cause the 33rpm disc is already near capacity at over 74 minutes so you'd need two discs for the 16rpm version. Still, c'mon! Of course, I guess if you get the vinyl and have a turntable that spins at 16 rpm (or you own one of those aforementioned CDJs) you can still listen to that unauthorized, even slooooower version for which no alternate song titles have been provided.

Again though, whatever speed you play it at, this album is... just such a pleasant place to be. Like I said, I really love it. Heck, I've been wanting to do a write up on this literally since it came out in September, but every time I put it on, well, I get a little lost in it. Where did the time go? (–Allan)