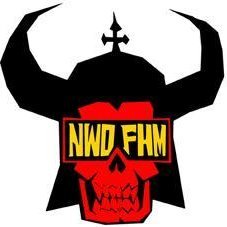 Sorry, got a little sidetracked over this past month (I, Allan, just got married, for one thing) but all right, okay, it’s about time for another post here!

So, one thing we’ll surely want to do in putting together our ‘big book of aQ reviews’ is to shine a spotlight some specific categories of music that were of special aQ-interest, perhaps even organizing the book around chapters devoted to different unusual micro-genres or what have you, kind of like how some of our ‘in-between lists’ were curated. For example, we had a whole section in our bins devoted to music from Finland - but to get even more ‘micro’ and specific, how about this subset of music from Finland that was popular at aQuarius: NWOFHM. Which, for any non-formerly-devoted-aQ-list-readers out there, may require some explanation.

Of course, we all love the New Wave Of British Heavy Metal, aka the NWOBHM, which was a real thing, starring bands like Iron Maiden, Diamond Head, Venom, Angel Witch, early Def Leppard, etc. And, we love the NWOFHM too - that’s the New Wave Of Finnish Heavy Metal, which is not so much a real thing, not exactly. It's one of our very favorite made-up genres though, one which sprang from the mischievous, musically genius mind of our pal and fellow metalhead, Jussi Lehtisalo from the band Circle - with some help from his equally demented cohorts. It’s not exactly metal, not really, though NWOFHM bands all make copious use of various signifiers usually associated with the heavy metal genre, in terms of lyrics and visual imagery (leather, spikes, songs with titles like “Battle Of The Axehammer” and “Steel Tormentor”, and, um, “Metal Infant”), sometimes in the music as well (with distorted guitar riffs & screaming vocals). There are certainly examples of NWOFHM that verge into being quote-unquote actual metal but some of it merely occupies an irregular orbit around the idea of metal, from a distance, while managing to be something very metal and very not metal at the same time. In fact, some of the best NWOFHM is remarkably gentle, pleasant, and (in its own quirky way) quite poppy. Certainly much of it is rather more, shall we say, whimsical sounding than most of the ‘real’ metal we usually consume. But that doesn’t mean you can’t bang your head to it as well.

By nature an extremely confusional style of music, the NWOFHM is difficult to sum up in a simple ‘best of’ kind of way, so all the more reason for us to attempt it… So, here goes, the Why...Do You Like It? Guide To The Top Fifteen Or So NWOFHM Tracks In The Universe Ever Yet, That We Could Find On Youtube, presented band-by-band, in no particular order (or rather, in a particular order that I can't really explain that easily):

CIRCLE!!! There’d be no NWOFHM without Circle, but this long-running, unguessably creative outfit is not exclusively a NWOFHM band, if we take NWOFHM to be descriptive of an actual style of music and not simply Circle's marketing slogan. However, they’re the logical place to start, as the NWOFHM was invented by these guys, though Circle was making music long, long before they started (jokingly?) referring to any of their stuff as NWOFHM. All the various NWOFHM bands are Circle offshoots, and Circle themselves are responsible for many essential examples of self-proclaimed NWOFHM music, especially on such genre-befuddled albums as Sunrise (2002), Tulikoira (2005), and Katapult (2007). The latter of which Jussi described to us as being supposedly Circle’s “60’s Black Metal” album - both psychedelic and grimly metallic, maybe. And lots else besides, of course. With song titles like “Torpedo Star Throne” and “Skeletor Highway” (metal, eh?) but also “Snow Olympics” and “Fish Reflection” (not so metal-sounding, those). And in fact, one of my fave NWOFHM cuts by Circle, comes off of Katapult and is called, believe it or not, “Understanding New Age”, though it’s probably thee most metal thing on whole album. Couldn’t find a YouTube clip for it though, so here’s the dark & disturbing “Fish Reflection” instead, check it out:

Now for a couple more killer NWOFHM tracks from the Circle catalog, that help to explain why Circle, despite their kraut/space-rock origins and unmitigated eclectic WTF?-ness, have earned themselves an entry in the Encyclopedia Metallum.

From Tulikoira, “Tulilintu” - listen to facsimile metal god Mika Rättö belt it out on this one:


Next band up, KRYPT AXERIPPER!!! The first exclusively NWOFHM side-project any of us at aQ encountered, circa 2007, in the form of a 4-song cd ep called Mechanical Witch presented as if it were a reissue of a piece of ‘80s vinyl. In truth, Krypt Axeripper is the duo of Jussi and Mika from Circle (Jussi as “Krypt” singing and playing the stringed instruments, Mika as “Rattfinder” on drums). Too bad they never followed up with a full-length (someday?) but the ep is perfect as is. All four songs are great, super catchy and poppy but pretty darn metal too, in that whimsical way I mentioned. Supposedly influenced by Manilla Road, Cirith Ungol and Cloven Hoof, here's a sample, “Possessed (By Trees)”:


Then, there’s the mighty PHARAOH OVERLORD!!! This group is exists as Circle’s sometimes-heavier alter-ego, who started off doing a “circular” version of desert / stoner rock on their 2001 debut. Heavy & fuzzed out but not NWOFHM, really. But like anything Circle related, they soon mutated in unpredictable ways, eventually doling out dark psychedelic drone and Stooges-y stomp. And on album number four, titled #4 (2006), they created what may stand as the ultimate heavy metal / hypno-rock hybrid, with such epic, eerily metallic tracks as “Now We Know," “Ridin’,” “Secret Chamber,” “See Me Evil,” “Demons In The Rising Sun” and “Dark Side.” All of it utter chugging ümlaüted awesomeness. Here’s “Ridin’” - gotta love the delightful video someone appropriated for it:

Of the whole album, though, this is maybe my favorite cut, “Demons In The Rising Sun,” especially when the song hits about the 4:15 mark:

But then that’s followed by the 8+ minute instrumental “Dark Side” which will drag you (willingly) to hell… so good!!

Then a few albums later, after various detours into everything from noisy improv to druggy dirgey spacerock, Pharaoh Overlord unleashed the hard rockin’ Out Of Darkness (2011), a truly batshit yet solidly metal/stoner/prog masterpiece with an array of guest vocalists (including, yet again, Bruce Duff). From that album, the cut might be the most “circular” yet also more intensely metallic, closest to the stuff on #4, is “Devastator”, a track that kills ‘em all over and over and over again:

One more from Out Of Darkness, the title track, with Sam Velde of Night Horse / Obliterations on vocals:


MERCEDES HELL!!! and MOTORSPANDEX!!! Now, besides Krypt Axeripper, there have been several one-off NWOFHM acts, bands with interchangeable memberships, we assume, that did a single vinyl-only single release each on Ektro’s Full Contact imprint: Mercedes Hell, Tractor Pulling, and Motorspandex. All worthy NWOFHM jammers. All those bands, along with the trio of Kangas-Lehtisalo-Tuomi, also appeared with new songs on a super limited edition cassette that Ruton put out in 2015 called NWOFHM Attack Vol.1, which sadly somehow I lack a copy of, consigning me to NWOFHM poser-dom, dammit. (Jussi, please put this out on cd!) 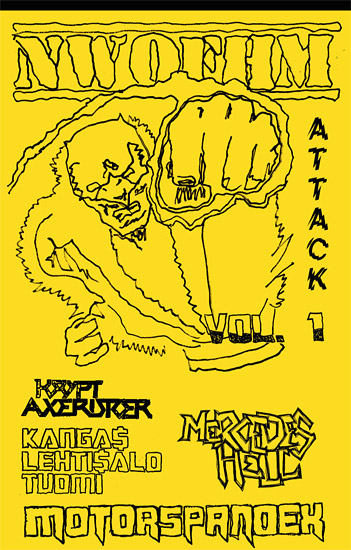 However, here's “Kingdom Together” from the A-side of the Mercedes Hell 7”, featuring chants of “Reality!” and “Rock and Roll!” - like the whole ep, it's a propulsive track that comes close to a lot of what Circle’s Katapult sounded like, really:

The very similar Motorspandex also rules, heck here’s four of the seven tracks from their 7”:


Ok, stopping here for now. Please stay tuned for Part Two of this guide, someday soon. Yet to come, tracks from what might be the ultimate NWOFHM band, the prolific, puzzling Steel Mammoth. Plus: Aktor, Arkhamin Kirjasto, and more, including perhaps some discussion of what we might consider the “roots of the NWOFHM.”

Until then, enjoy this bonus video: footage of Circle doing “Rautatie” live at Supersonic Fest in 2011... Taking the piss perhaps, and taking it over the top, most definitely, but amazing. Check out Mika’s moves (and outfit). Also note Jussi’s Lizzy Borden T-shirt. Settle in, it’s 15 minutes of radness: