First off - as may be obvious - we switched up the template for this here blog site. Got rid of the one we’d originally picked, which had turned out to be kinda buggy, so now hopefully functionality will be improved (especially re: commenting). Definitely still experimenting with the look, we’ll be futzing around with it for a while, and hopefully improving it, so don’t be alarmed if it appears a bit (or a lot) different the next time you visit!

And then - The Book. That’s our big project, currently in its very earliest stages. Right now we're just trying to envision what it’s gonna look like: How big it’ll be, what format (hardcover? softcover? something to display on your coffee table? to read on the toilet?), how many of the many thousands of aQ-reviews we can fit in, which ones to include and then how to organize ‘em all… The reviews that we select will then need to be edited (slightly), re-proofread, fact-checked, and annotated - yep, we’re planning on appending a sentence or two in italics or something to some (most?) of them, giving them more context, or putting them in a now-perspective, like, “What were we thinking? This album is terrible!” or “Why didn’t we mention the hidden bonus track?” or "Utterly don't remember this record at all but it's obvious I wrote the review, what's wrong with me?" Stuff like that. But better.

Under consideration also are other value-added features, like mini-essays on sub-genres and best-of-lists and bits from guest contributors and a cd compilation or download or 7”… Lots and lots to think about. Input & ideas encouraged, please let us know what you’d like it to be like.

But that’s getting way ahead of ourselves. Right now, still conceptualizing. To just get a grasp on the scope of the project & all the material we’re gonna be working with, we figure we need to start re-reading ALL the the reviews from the lists #1 through #502. That’ll take a while! To begin with, we’ve dug up the big three-ring binders that we used to have on the counter long ago in the shop, that were stuffed with print-outs of the first 250-or-so lists. That’s five large binders just for those lists alone - quite a stack: 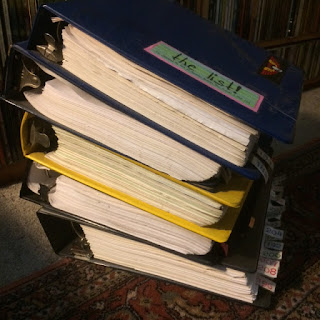 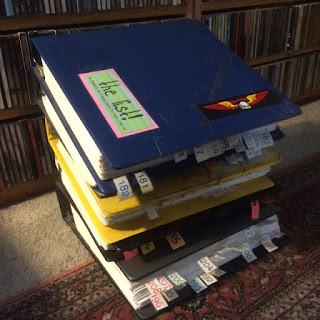 So, we’re now carefully going through 'em and taking notes on releases/reviews that jump out as being essential, stuff that’s gotta be in the book (The Conet Project! Sensational! Sounds Of North American Frogs! Kathy McGinty! Feuhler! The Electric Lucifer! Shevalreq!), also getting ideas about possible ways to group reviews together if we go that route, how much revision is gonna be necessary, etc., etc.

It’s a weird moving-forward and yet at the same time diving-back-in feeling - been stirring up lots of nostalgia readin’ through these binders. Fun, though, and it's been reminding us to listen to a lot of things we hadn’t in a while, which is always good.

Also super good - we’re pleased to report that an ideal aQ-lovin’ indie rock luminary (and New York Times best-selling author) has already agreed to write the foreword, and we have also lined up a talented person to do the design! (Names withheld for now just to be secretive and in case somebody changes their mind.)

Also, not regarding the book, but also speaking of progress, congrats to our successors Stranded for getting their brand new website up recently and putting out their first few weekly email updates these past several Fridays. Not quite the old aQ-list, but they did include some fresh reviews in each update, some written by former aQ-staffers, so that’s a start!

And our pal Ken's long-in-the-works documentary about aQuarius is also progressing (he's probably happy we gave him an ending!), he's recently been posting some clips from it online, like this one...

Lastly, nothing to do with progress, but we thought we'd stick this tidbit in here as well: Kirk just alerted us that the new album that just came out by next-level rap group Clipping. includes samples from The Conet Project. (Hopefully they’ll have better luck with that than did Wilco.)
Posted by horrox