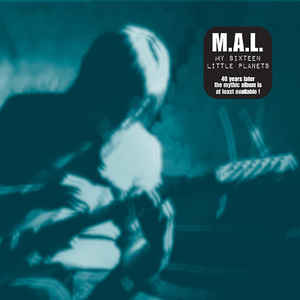 The press materials accompanying this archival release make a big deal about the alleged similarities between it and Ash Ra Tempel guitarist Manuel Göttsching's better-known Inventions For The Electric Guitar LP that came out in 1975, around the same time this "mythical" album was recorded. Göttsching is accused of having appropriated techniques actually invented by M.A.L.'s Daniel Malempré. The claim is made that "in early 1974, Göttsching's label received a tape sent by M.A.L. – same design, same configuration, almost the same tracks [as Inventions For The Electric Guitar]." Hmmm... who knows the truth? Göttsching? Rolf-Ulrich Kaiser? And you know what, we don't really care that much about all that.

But what we do care about is that track five here, "Thor," is some serious seventies drone-doom! Sounds like a hippie solo psych-guitar version of SUNNO))). Droney, spacey, heaviness maaaannn. And the other tracks are cool too – all far-out home recordings circa 1972-1976 from one Belgian guy with guitar, effects, and 4-track (specifically: Fender Stratocaster 1964, pedal Wah-Wah Cry Baby, and Sony TC-630 reel-to-reel recorder).

Released by Sub Rosa on cd and in a truncated version on vinyl with only eight tracks (planets) instead of sixteen, for those who'd like to pay a little extra for half as much music. Both are available from Forced Exposure, where you can also find sound samples...
Posted by horrox