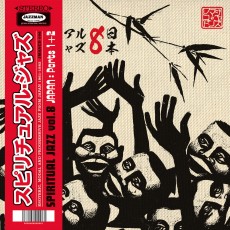 Ten years ago, the London-based Jazzman label launched this great series of comps devoted to 'Spiritual Jazz' from the sixties and seventies, what they describe as "esoteric, modal, and deep jazz from the underground." Think Pharaoh Sanders and Philip Cohran, but more obscure selections, for sure. We reviewed six volumes in the series on the aQuarius list, and while we never made any of 'em a Record Of The Week, we probably should have. As the series progressed, individual volumes delved into different scenes and aspects of Spiritual Jazz – you had your European cats, your American expatriates in Europe, a vocals-oriented volume, and then last year an installment concentrating specifically on Islamic inspired spirituality in jazz.

Released last month, now here's the most expansive entry in the series yet (eight sides of vinyl, or double cd), focusing on Japan's abundant and impressive progressive jazz underground circa 1961 to 1983, compiled with the assistance of Tokyo-based jazz collector and DJ, Yusuke Ogawa. Comes complete with liner notes in English and Japanese, and even boasts a mock obi, nice!

The only artist on here we were all that familiar with already was guitarist Masayuki Takayanagi's New Directions For The Arts, who contribute a fantastic piece called "Sun In The East" from their 1972 Free Form Suite album, not quite as intense and outside as Takayanagi can get* but still definitely amazing, gorgeous deep stuff (as is the rest of the compilation). It's one of the ones you can check out below.

*For a taste of really freaked out Takayanagi, our #1 recommendation is the 1970 recording released on PSF under the title Call In Question, which aQ once described as: "Some of the heaviest 'jazz' ever... The drummer should be in a hardcore band, the guitar player makes Sonny Sharrock sound like a wimp, and the bass and sax are equally intense... Noise guitar way ahead of its time. Beautiful, beautiful noise."
Posted by horrox